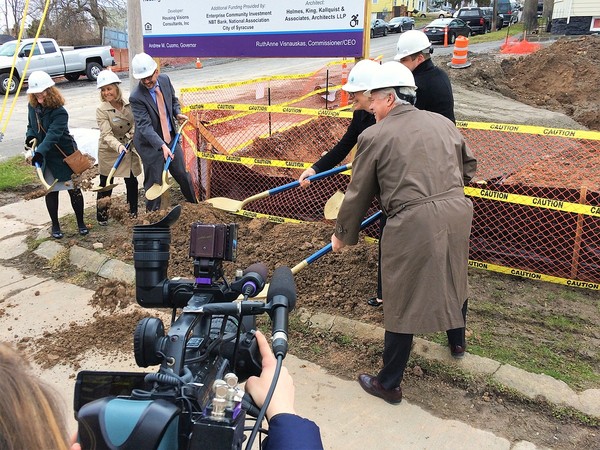 Syracuse, N.Y. — Work has started on Butternut Crossing, a $16.3 million, seven-building development that will include 53 new, affordable apartments on Syracuse’s Northside.

State and local officials held a groundbreaking ceremony Tuesday at the former site of Donze’s Meat shop on North Townsend Street, where one of the apartment buildings will be built.

As part of the project, 11 dilapidated homes and commercial buildingswere demolished, along with two buildings from St. Joseph’s Hospital.

The development is a project of Housing Visions, a not-for-profit housing development organization. It consists of six new buildings and the rehabilitation of another.

Ben Lockwood, vice president of business development for Housing Visions, said construction will be completed in the summer of 2019.

Monthly rents will depend on tenants’ incomes and will range from $450 to $800 for one-bedroom units, $600 to $900 for two-bedroom apartments, and $370 to $700 for three-bedroom units, according to Housing Visions. Utilities are not included in the rent but should amount to no more than $100 a month, the organization said.

In addition to the apartments, the project includes 3,870 square feet of commercial space.