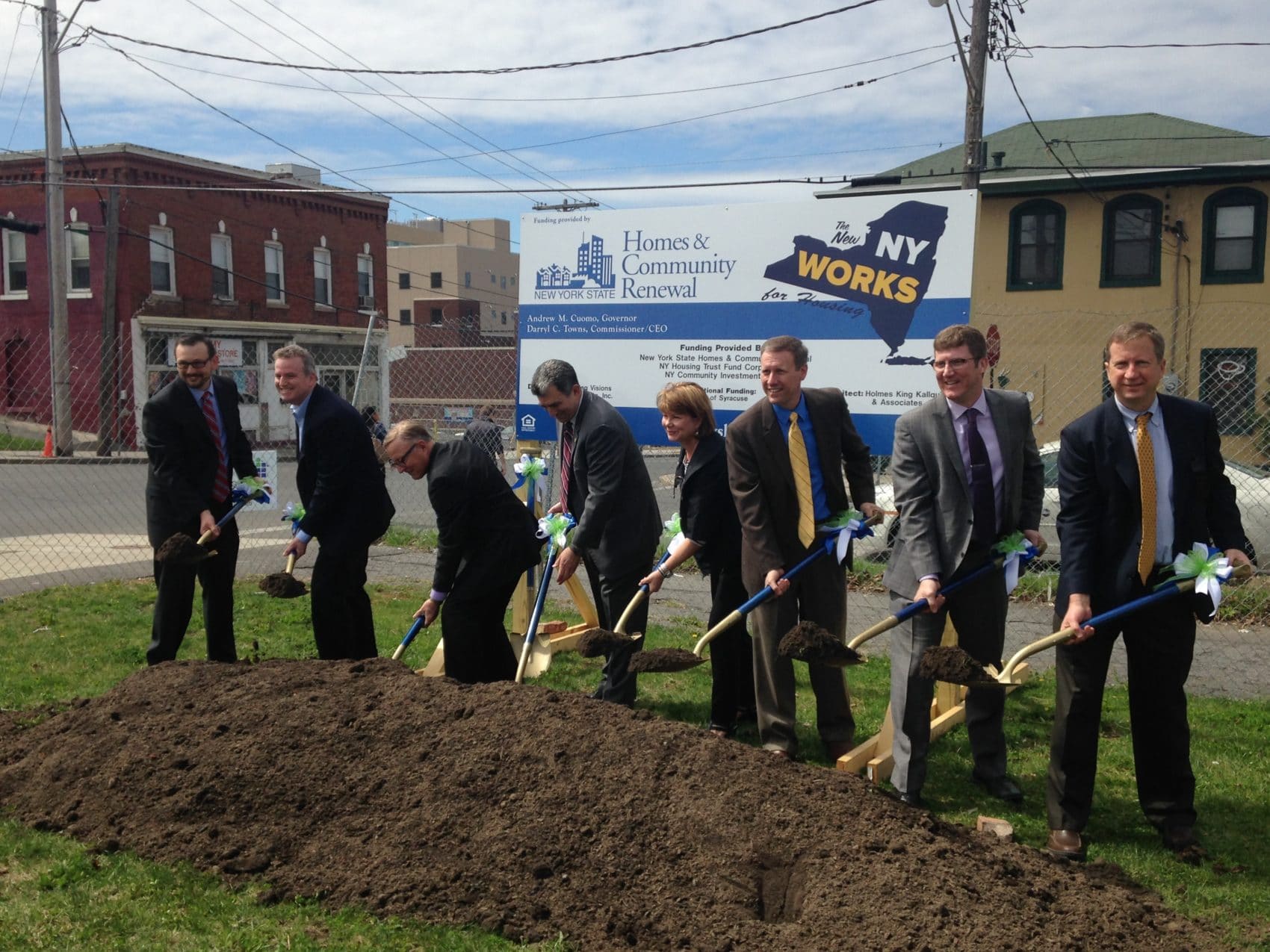 Some doors opened to show new housing in the city Tuesday, after local, state, business and other officials held a ceremonial ground-breaking for the Oneonta Heights housing development.

Housing Visions Consultants Inc. held the event for its project, and about 75 guests gathered at the site of the rising apartments at the corner of West and Columbia streets. Speakers applauded the cooperation in the public and private sectors that led to the $15.9 million project, which will create 60 affordable housing units for families and senior citizens.

Housing Visions developed the plan with New York state, the city of Oneonta and Opportunities for Otsego. Some properties will be available for lease later this year, officials said.

“It’s another great day in Oneonta,” Mayor Gary Herzig said told the crowd. A week ago, the city was celebrating a $10 million award from the state’s Downtown Revitalization Initiative.

Benjamin Lockwood, vice president for business development for Housing Visions, said the construction progress is obvious but the planning took about 10 years. He credited the city with staying focused on seeing results.

According to a 2016 report by the National Low Income Housing Coalition, Otsego County renters must work 70 hours per week at the current minimum wage to afford a two-bedroom apartment, Maskin said. The No. 1 reason given for homelessness at Opportunity House, OFO’s emergency shelter, was non-payment of rent, he said.

“Developing an affordable housing project is a long process and a tricky needle to thread,” Maskin said. The project involved land acquisition, zoning, partnerships with municipalities, financial backing and more.

“The fact that this all came together is a remarkable achievement for the city of Oneonta, and more importantly, the working people who can now raise their families in a safe and affordable environment,” Maskin said.

When completed, Oneonta Heights will consist of seven buildings.

At West and Columbia streets, four derelict buildings were razed and two four-unit buildings and a two-unit building are under construction. This housing is expected to be ready for leasing in October, officials said.

Between Clinton and West streets, on about 5 acres along Silver Creek, a senior-citizen housing center will be built with 40 living units. Officials said construction is estimated to be complete by August 2017.

Nearby, on Monroe Avenue, two four-unit buildings are under construction, with availability next year, officials said, and a rehabilitated two-family residence on Spruce Street is slated for occupancy in December.

After the ceremony, some speakers and guests went into a nearby four-apartment building to look into the unfinished bathrooms, bedrooms and other living spaces. A shuttle also took guests to the Monroe Avenue site. Crews were working, and signs of the proposed 40-unit senior housing complex were visible, including an elevator shaft.

“These new housing units will invigorate our neighborhoods and help boost the local economy,” state Sen. James Seward, R-Milford, said. “Creating quality, affordable housing opportunities for our families and seniors strengthens our communities and meets a critical need in Oneonta.”