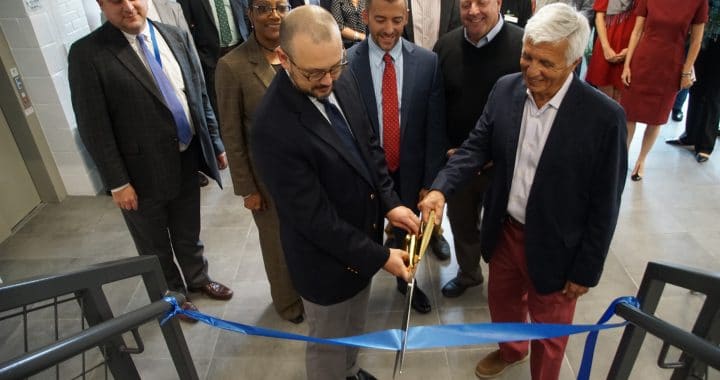 Empire State Development (ESD) today announces the official grand opening for the Crescent Commons mixed-use development project on Main Street Cortland, Cortland County. The joint project, between developer David Yaman Reality Services and Housing Vision Consultants of Syracuse, saw the transformation of the historic Crescent Corset factory building on Main Street. The project includes residential and commercial space. The rehabilitation of the long-vacant industrial building in the heart of downtown Cortland included the construction of 47 high-end loft-style luxury units as well as a cafe, lounge and exercise room. The building also offers 100,000 square feet of commercial space. So far, 13 residential lofts have been leased; 3 tenants- including David Yaman Reality, Family and Children’s services and Franciscan Heath Support- are occupying some of the available commercial space. The transformative project was supported, in part, through a CNY Rising Upstate Revitalization Initiative Grant.

Empire State Development President, CEO & Commissioner Howard Zemsky said, “Taking the abandoned, former Crescent Corset factory warehouse and giving it new life and use for residents and businesses in downtown Cortland is just one of the many ways we are repurposing historic buildings and re-energizing city centers and economies around New York State.”

The former Crescent Corset factory is on the State and National Register of Historic Places. As a result, part of the restoration efforts included efforts to maintain the original integrity of the building which has stood on the site since 1923. The factory used to manufacture “Lady Luke” corsets for JC Penny’s.

Ben Lockwood, President and CEO of Housing Visions said, “Housing Visions is excited to strengthen its commitment to the City of Cortland with the opening of Crescent Commons. This adaptive reuse of this historic structure on Cortland’s Main Street is the first of its kind for commercial and residential tenants. Together with our local, experienced partner David Yaman, we have provided a quality, convenient, and luxurious commercial and residential experience for the City of Cortland.”

In October of 2017, the City of Cortland was named as the Round Two winner of Governor Cuomo’s Transformative Downtown Revitalization Initiative. Cortland’s downtown is the core of the Central Business district and is within walking distance to SUNY Cortland and Tompkins Cortland Community College Extension. In July 2018, the Governor announced funding for the 10 transformational projects chosen to reimagine the city’s infrastructure and main street while harnessing technology and talent to improve the city’s quality of life.

Senator James L. Seward said, “Cortland has so much to offer and a number of steps have been taken in recent years to develop and enhance the Main Street/downtown area – creating jobs, expanding housing, and encouraging community growth. Many additional projects are on the horizon and Crescent Commons will play a key role in the continued transformation. Cortland has a storied history and projects like this will help lead the way toward a prosperous future.”

State Assemblywoman Barbara Lifton said, “The adaptive reuse of the former Cortland Crescent factory is a wonderful addition to downtown Cortland. Not only will it provide much-needed commercial space and housing, but it will preserve and restore a historic building that is a part of Cortland’s rich history. I’m very proud to be a long-time supporter of the critical Historic Tax Credit program that allows wonderful projects like this one to come to fruition. I want to thank the Yaman family and everyone else who was involved in making this project a reality, as well as the Governor for his continued commitment to the revitalization of downtowns across upstate New York.”

Cortland Mayor Brian Tobin said, “Dilapidated old factories are a drain not only on local economies but also on the psyche, as they are reminders of days gone past. These large structures are difficult to occupy, so typically sit vacant and abandoned for years, until they are either knocked down or fall down. A project of this magnitude takes a lot of vision and effort, and I commend Dave Yaman for his efforts. With the support of New York State and Housing Visions, we are stabilizing a neighborhood that has struggled for years with vacant properties. Thank you to all parties involved, Cortland will continue to be a great place to raise a family!”

Accelerating Central NY Rising
Today’s announcement complements “Central NY Rising,” the region’s comprehensive blueprint to generate robust economic growth and community development. The State has already invested more than $4.7 billion in the region since 2012 to lay the groundwork for the plan – capitalizing on global market opportunities, strengthening entrepreneurship and creating an inclusive economy. Today, unemployment is down to the lowest levels since before the Great Recession; personal and corporate income taxes are down; and businesses are choosing places like Syracuse, Oswego and Auburn as a destination to grow and invest in.

Now, the region is accelerating Central NY Rising with a $500 million State investment through the Upstate Revitalization Initiative, announced by Governor Cuomo in December 2015. The State’s $500 million investment will incentivize private business to invest well over $2.5 billion – and the region’s plan, as submitted, projects up to 5,900 new jobs. More information is available here.​