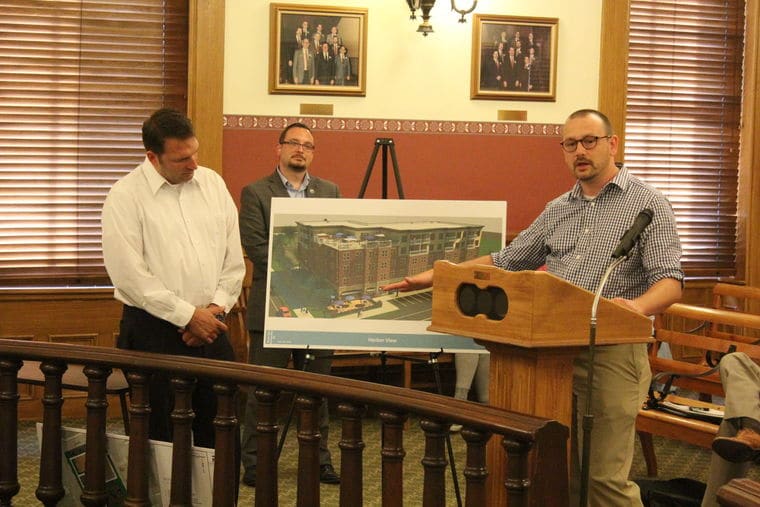 Syracuse nonprofit Housing Visions proposed the 10,000 square foot project, which includes almost 70 total units in townhouses and a five-story capstone building at the corner of West First and Lake streets, to the Oswego Administrative Services Committee.

Officials said the project comes on the heels of recent environmental reviews by Synapse Risk Management, which showed remediation at the former industrial site could cost upwards of $2 million.

Oswego Community Development Office Director Justin Rudgick says rather than the city banking on state grant funding to address contamination at the site — which could take years as the state has a backlog of municipalities looking for cleanup funding — the city could sell the site and let the developer apply for cleanup financing and tax credits available for contaminated sites.

“The proposed timeline is ambitious and based on previous experiences … and their impeccable reputation I am confident they will deliver a project that the city of Oswego can be proud of,” Rudgick said.

Officials say the site could sell for approximately $150,000.

“The bottom line is it’s better if we let the developer [clean up the site],” Council Vice President Rob Corradino, R-7th Ward, said. “Do we want to wait years or do we want to get this thing going?”

While representatives from the company said they were proud of Hamilton Homes’ quality units, the proposed Flexo Wire site development is on the “opposite” side of the market compared to “affordable housing,” with income requirements likely ranging from at least $30,000 to “whatever the market can bear.”

“We’re excited to partner with the city and Synapse and be part of the waterfront revitalization,” said Ben Lockwood, Housing Visions’ vice president of business development.  “[The development] will be a key cog and go a long way to ignite this end of the city.”

Lockwood said the company understood it was a “complicated site,” with expensive cleanup costs “before the proverbial shovel is in the ground.”

The company estimates 96 parking spots — likely paved over the remediated areas with the most industrial contamination — interspersed with landscaping. The company hopes for retail and restaurant space complimenting the waterfront and the nearby ongoing development of the Cahill building.

Corradino questioned the group on whether the Port City had a market for more housing.

“Demand is not as great as supply,” he said. “Can the city of Oswego actually fill these?”

Lockwood responded that the “new, exciting” buildings could provide amenities unseen in that part of Oswego, which would attract renters.

Rudgick added that throughout the city, more “quality housing” was needed at all income levels, “from affordable to luxury.”

Oswego Mayor Billy Barlow said the city “knew it would be difficult to find interested developers” because of the extensive environmental cleanup; the site for decades has only been used for manufacturing,

“Housing Visions presents a plan that I believe properly utilizes the site,” he said. “Their plan positions them to capitalize on residential units overlooking the waterfront.”

The full council will vote next week whether to select Housing Visions as the preferred developer for the site.

If approved, Housing Visions says it will work with city officials on the planning process and state officials on cleanup and financing options over the next few months.